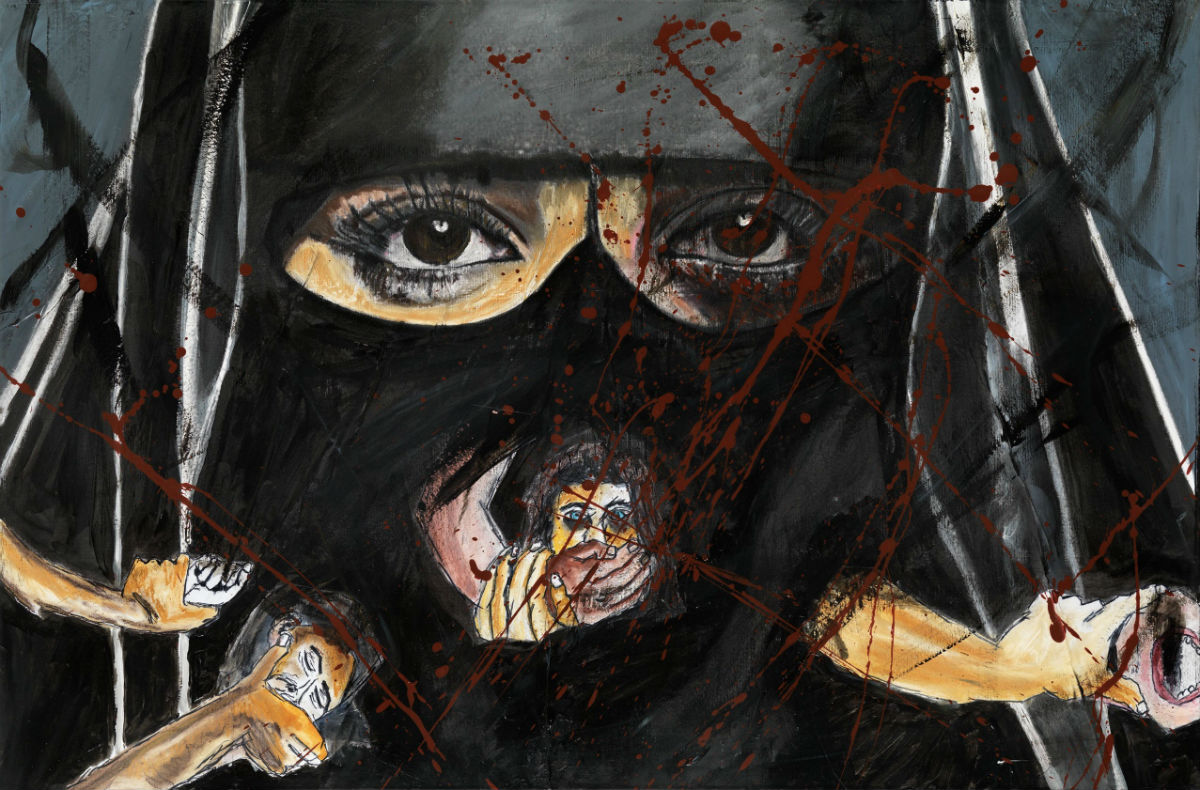 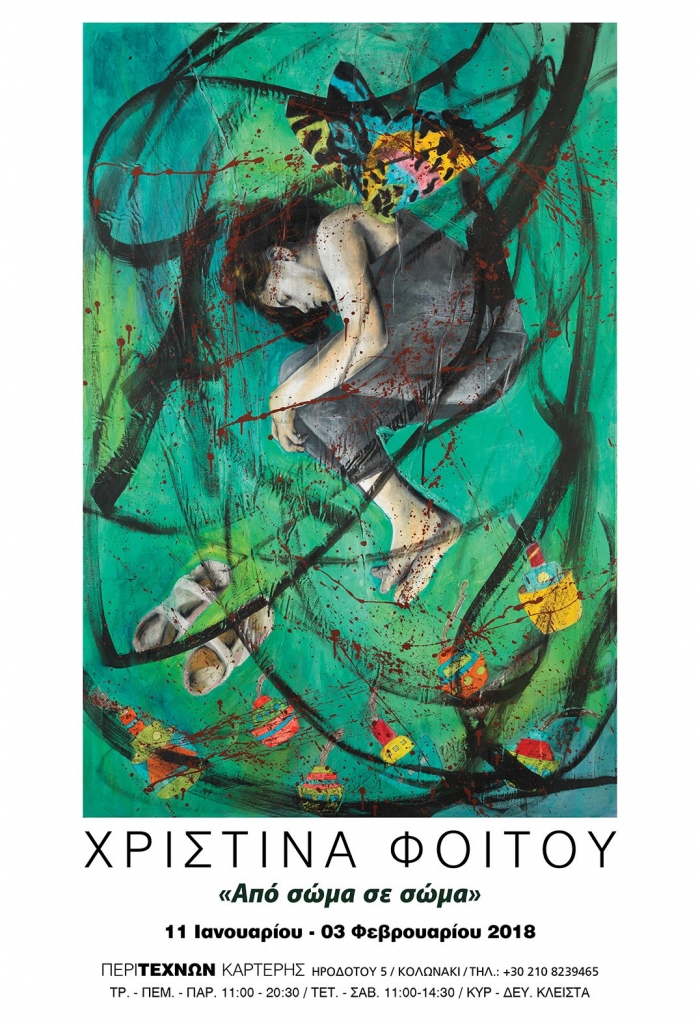 Christina Foitou concentrates on the female psyche and portrays the entire emotional world of women in her series of works titled “female agony”. With her strong, expressionistic style she depicts all kinds of feelings, such as pain and sorrow, anguish and anticipation, joy and pleasure, which form the nature and experiences of today’s women. She articulately illustrates acute emotional states in a more or less suggestive manner, and approaches them sometimes with real tenderness and sometimes with great cynicism. Her rather familiar visual vernacular is formulated by fragmented images, which are brought together by her characteristic, sensational flair to create a flowing and solid narrative. The artist’s works, with intense, lavish imagery and complexity of form, appear like a series of fleeting, moving images, which are very dynamic and at times even volatile. Her canvases display a plasticity of form, which makes them look like stills from a performance, as part of a staged, empirical show that goes on forever. In Foitou’s case, this is partially true, since the artist often gives performances herself and this form of art evidently affects her visual expression with its intense action and movement.

Foitou depicts actual traumatic events to address issues, such as social exclusion and discrimination, isolation, bullying and humiliation, abuse and oppression hence her works are a clear protest against the problems contemporary women are faced with, directly or indirectly. To underline each specific message the artist has also incorporated symbolic imagery in her works: the thorn crown worn by Christ to indicate pain, the burka to highlight restriction and isolation, the mask to refer to the suppression and concealment of abuse, and the insects to allude to the stress from the constant abuse, violence and oppression that, like the bugs, is eating away the women’s soul. Furthermore, the artist illustrates emotions related to motherhood, which is a very important chapter in every woman’s life. She portrays a vast array of feelings, happiness, apprehension and anticipation, as well as the pain following the loss of a child and the separation anxiety, the emotional void and the guilt, as she herself describes in her work “Longings”: “…where is my baby gone? My belly is empty, by arms too. Despair. I search for you and seek you in the maelstrom of strain that bore you. I try to touch you but you keep moving away. I had a dream about loss…”

Although she often concentrates on female anguish, at the same time Foitou effectively and with great sensitivity exalts the magnitude of woman’s nature, her multifaceted personality, her strength, her beauty, her perseverance, as well as her tender approach to motherhood. She delivers messages of hope using indirect iconological references, such as the “souls” and the butterflies, which, after their transformation, fly away free, far from the harsh realities of the everyday life and the emotional impasses, looking with confidence towards the days to come, days positive and colorful as opposed to the dark and colorless present. In her work “The Dream” the artist notes: “Child. Is it easy or impossible to be one? […] What happens when the path to childhood is not so bright? When you are called to deal with adversities, dead ends, doctors, nuisances, worries, insecurities from the moment you are born? When being different is in fact not always appealing and you have to fight to assert yourself, yes as a child! The girl is lying down, sleeping? Her little casts are resting next to her. Her armor that assisted her, held her up, but at the same time hindered her and often frustrated her and was the cause for comments and taunts. She is dreaming now, that she is floating in a drifting world where all is peaceful. Is she? She is now a butterfly, beautiful, free, relaxed, but also short lived, as short lived as carelessness also is.”

Moreover, Foitou tells explicitly, but with great sensitivity and unique style, about the mixed emotions that arise from the social pressure placed upon women to secure the “perfect marriage”. A dream that many girls have longed for over the ages, this social convention is at the same time a tough legacy for women to uphold and often develops into a form of oppression for them: “Long live the bride and the groom! A man’s hand and the hand of a woman. The hand of the man touches the hand of the woman timidly, cautiously yet tenderly, living us wondering… will he hold it, will he protect it? Will he let go or squeeze it tight? I do not know! Uncertainty. Many women still wait for their prince, for the perfect relationship. Why? ‘May you live long and happy together’ is what they wish the newlyweds at weddings, a beautiful wish, but does it really come true? Flowers bleed and relationships fall apart.”

In her imagery Foitou brings into play distortions, deconstructions and unlimited fragmentation of her realistic representations of the human form. She allows strong colors, such as the red color of blood, the black of the darkness and the yellow of the burning flame, which she tosses sloppily all over her main theme, assume the leading role in her compositions and attract the viewers’ eyes, thereby creating a feeling of uneasiness. The artist boldly addresses crucial issues, some common and some extremely complex, that affect women and are usually considered out of limits or taboo, she introduces and communicates them to the public in such a way that the viewer actually becomes a partaker in women’s timeless and silent struggle. Making the most out of art’s capacity to have a positive influence on people, Foitou gives her own fight as a woman, in order to reach a wider audience and contribute to society as a whole. She denotes and underlines with her artistic expression the magnitude of the female psyche and passes her messages from “one body to another”.